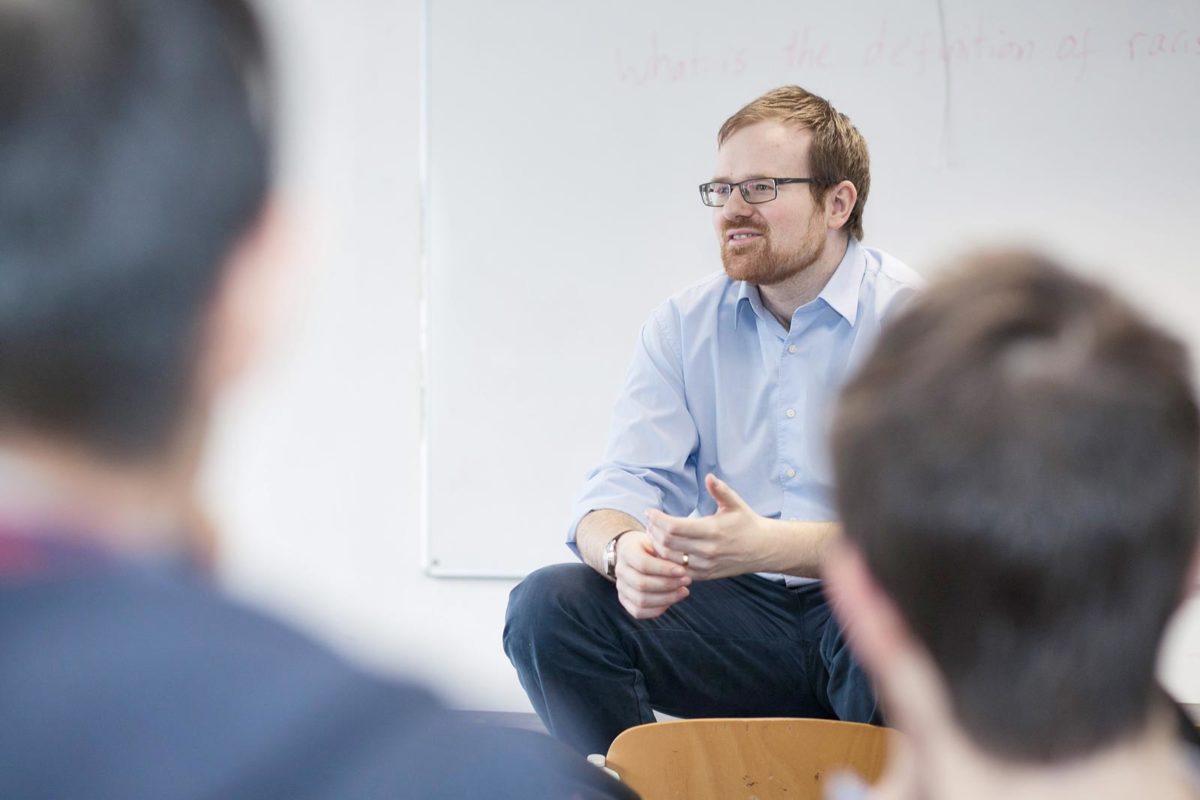 We have for you an interview with one of our English teacher Ross Grayston. Read more for finding out what he is thinking about our balls 😉

What is your favorite thing about the Czech Republic?

Ross: Well, I guess one of my favorite things is the mixture of culture. Despite the fact that the Czech Republic probably doesn’t have as much mixture of culture as the part of the UK that I am from. Because there is a large influx of Pakistani and Indian people. I would say that it’s perfect for me, having spent a few years in a Russian speaking country and the ex-soviet elements of it having not being from Russia itself. Living here I can feel some of those past elements, but I also have a clearly defined feeling of Europe. So I have an attachment to my own home, which is Europe, of course, the western part, but I also have some things I really liked on living in an ex-soviet state. And there are Slavic cultural elements that I really appreciate, like their tendency to put family first which is something that western families don’t generally do, they put friends above family. And it’s very nice to have this family orientation, but still, have this understanding that friends are important.

What do you think of the balls that we have here?

Ross: The first year I hated them, because I couldn’t dance. Some students may remember me standing in a corner, trying to do the waltz with Mrs. Mandlerova. But the following year me and my wife took some dancing lessons and it turned out well. There are so many small traditions that I would never know about if I didn’t go to the school ball. A good example is the throwing of the money which is clearly made by the teachers so they can throw coins at their least favorite student.

Have you in the time of your stay here been for an extended amount in a village?

Ross: Every year I participate in a summer camp in a place called Sepikov which nobody has ever heard of. It is tiny and while it has a square, I would still classify it as a village. I know that is an unpopular term in this country, people turn to me and say: “no no, that is a town”. However, Sepikov has only one shop, therefore I declare it to be a village. And yes, I do enjoy traveling along the countryside.

Ross: I do, but I have to say that because of the quantity of stuff they produced, some of it’s awful. I generally prefer their films like Life of Brian or The Holy Grail. Their other shows like The Flying Circus are a mixed bag for me.

What is the difference between this school and any other that you have been to?

Ross: Well, certainly the way this place looks is significantly different. The communication between students and teachers has a much friendlier feeling. It’s positive if the students understand that there is still a barrier of respect. It’s bad if they think they are simply friends. Then it breaks down the concept of teaching. One of the things I really like about it is that it really feels like a family. Here you know you can approach your colleges in a reasonable manner. Other places I have worked in were much more gossipy. Not to say that there is no gossip here, but it’s nice that it’s possible to communicate with everyone.

What is the difference between Czech and British students?

Ross: There is no fundamental difference between them, the only real contrast is education. The Czech system is still quite reliant on memorization, while British students are lead to be more creatively oriented. And while memorization is excellent at getting a grasp on the basics of maths and sciences, coming up with new ideas is another story. In this school, I can see a push to developing the way people think, and the IB program is one of these movements.

View all posts by Linda Kimrová →